Not only athletes in heavy or strength sports can boast of large volumes and excellent relief of muscle mass. Often, even in such unusual disciplines as wrestling, you can find athletes of outstanding size. Yes, not everyone considers pro-wrestling to be a sport, but that is not the question now.

Confirmation of this is Dwayne Johnson, sporting such muscles these days that many bodybuilders will envy. He literally in a few years from an average “big man” turned into a real “car”, for which he received the loud nickname ‘The Rock’.

How did Dwayne Johnson build his muscles? The answer lies in long and hard training. Of course, it was not without a competent selection of the regime and diet (in combination with sports nutrition), but the most difficult workouts that ‘The Rock’ did not miss regardless of employment are in the first place.

Who is Dwayne Johnson?

Surely you either heard about this athlete and actor, or saw him on the screens in one of the roles. For those in the tank, we tell you: Dwayne Johnson, widely known under the pseudonym ‘The Rock’, is an American wrestler, film, television and voice actor, TV presenter, writer and just a man of many talents.

Dwayne Johnson was born on May 2, 1972 in Hayward, USA. It is a small American town in Alameda County (California). Dwayne can be said to have been interested in sports since childhood: at school he played American football, was involved in athletics and wrestling. He excelled in almost everything he undertook.

As a WWF wrestler, Dwayne Johnson made his debut in 1996 under the pseudonym Rocky Maivia (this is an anagram of the names of his father and grandfather). Gained popularity quickly. A bright stage image, combined with good, and later even superior results, made him a star on a national and even world scale.

Dwayne Johnson began acting in films in the early 2000s. His first serious film was “The Scorpion King”, for which the aspiring actor received $ 5.5 million, which is an absolute record for the first role (the achievement was even noted in the Guinness Book of Records). This was followed by filming in such tapes as “Doom”, “The Mummy Returns”, “Tooth Fairy”, “Amazon Treasure”, “Cobra Throw”, “Fast and Furious” and many others. Auto action “Fast and Furious 7”, by the way, is one of the most successful films of ‘The Rock’. The worldwide box office grossed about $ 1.5 billion.

Dwayne Johnson is currently actively training both physically and acting for new roles. At the same time, he did not completely tie up with wrestling (although he left the stage for a certain time). Performs mainly on the Raw brand. 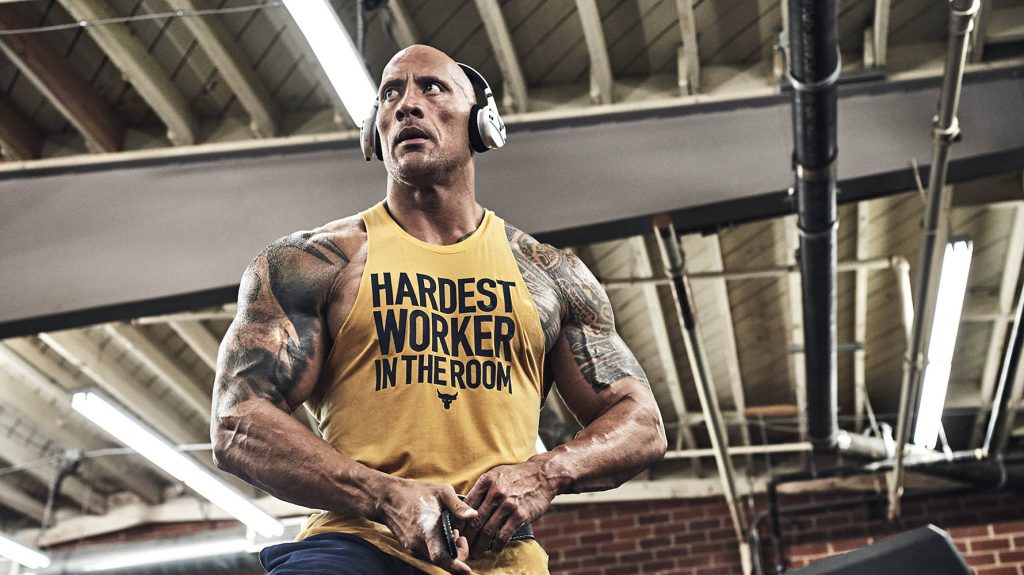 For ‘The Rock’, training started at a young age. As already mentioned, at school he was fond of various sports (from American football to athletics), so from a young age he had to work hard on his physical shape.

In fact, Dwayne Johnson began regular physical training at the age of 12, when he signed up for a local “gym” to occasionally punch a punch, chin-ups and push-ups. It was a kind of preparation for real loads. At that time, Dwayne trained more for himself, in order to show off in front of others and to show off his peers, if anything, put them in their place. Fortunately, the potential was huge.

At the age of 13-14, it became apparent that Dwayne Johnson’s training sessions were not in vain. With a height of about 170 cm, the guy weighed under 80 kilograms. He practiced almost every day and in addition to this he regularly covered the distance to the gym by jogging, performing a kind of cardio warm-up. The hall, by the way, was located 5 kilometers from the house.

By the age of 18, Dwayne had stretched and pulled himself up. His height at that time was already about 190 cm (now ‘The Rock’ is 1.95 meters in length), and his weight was about a hundred kilograms. At the same time, the guy amazed not only with his size, but also with his strength indicators, which is understandable, because he was already training “like an adult.”

Now the Dwayne Johnson training program is in no way inferior to those of professional athletes in bodybuilding or weightlifting. According to ‘The Rock’, he usually does 5-6 exercises of 15 repetitions of 3-4 sets. Between approaches, he does not rest for long – no more than 30-60 seconds. In principle, everything is mundane.

What else is known about ‘The Rock’ training? Mostly general details. So, according to available information, Johnson trains small muscle groups 2 times a week, and large muscle groups 1 time a week. The total duration of his classes in the gym can reach up to 1.5 hours, and about a third of the time is spent on warm-up and cool-down.

It makes no sense to describe any specific details. First, the Dwayne Johnson training program was tailored to his needs. And secondly, expensive trainers were sure to take part in the selection of the “scheme”. So, accurate, and most importantly, reliable information cannot be found in the public domain. If, somewhere, you find descriptions of exercises and other nuances of ‘The Rock’ workouts, then we would not believe them. The athlete has never really talked about this topic. Unless he described the details in his book, only it came out a long time ago and the information there is outdated. 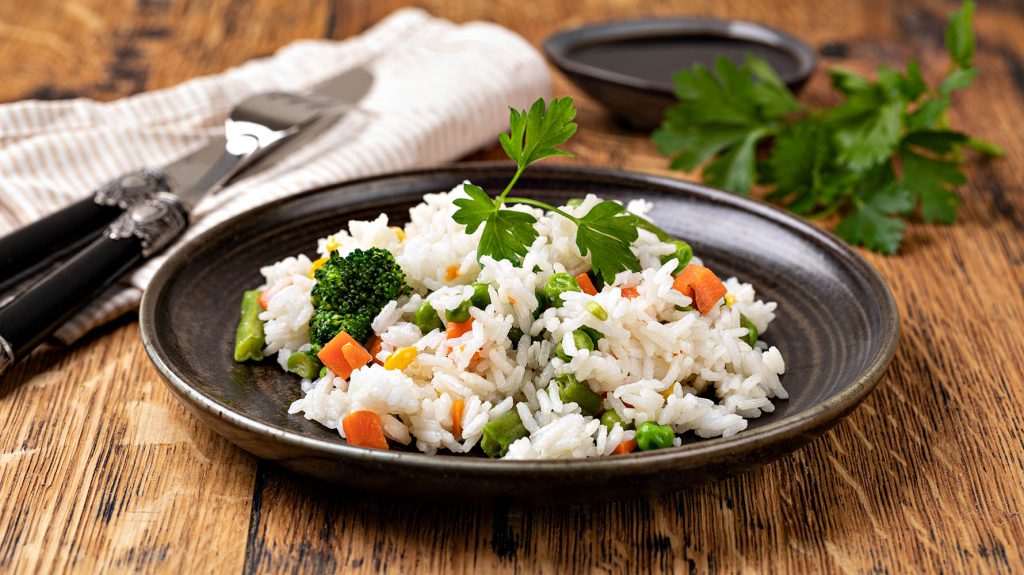 Unlike the workout routine, The Rock has never hidden the details of his diet. Approximately the same information, obtained mainly from interviews, is available in different sources. It is again difficult to judge how reliable this information is, but more or less by general impressions.

So, the Dwayne Johnson diet includes:

This is the approximate diet of Dwayne Johnson, but even from it it can be seen that the athlete prefers frequent meals in small portions and consumes a large amount of protein – about 3 grams per 1 kg of body weight. The total consumption of protein per day is about 360 grams, carbohydrates – about 500 grams. If in terms of carbohydrates this is almost the golden mean (with the weight of “Rocks” in the region of 120 kg, such an amount is optimal for an active lifestyle, including training), then in terms of proteins it is close to excess. On the other hand, inaccuracies could have crept into the above list. We remind you once again that the information is publicly available and we do not vouch for its accuracy.

What about sports nutrition? Here we can already say for sure that the wrestler regularly consumes protein (and from the “ON” company), BCAA, and also creatine. Again, everything is pretty mundane and familiar. No revelations have been observed in the diet of his sports or regular nutrition. Is he or was he on anabolic steroids? History is silent about this. Rumor has it that yes, but we will not stoop to rumors. Let the yellow press do it.

It should also be borne in mind that Dwayne ‘The Rock’ Johnson’s diet and regimen changes regularly depending on the work schedule. Therefore, the information provided may be somewhat outdated. But in general, such a “scheme” is easy to believe. Big man – big needs. And here we see their observance. 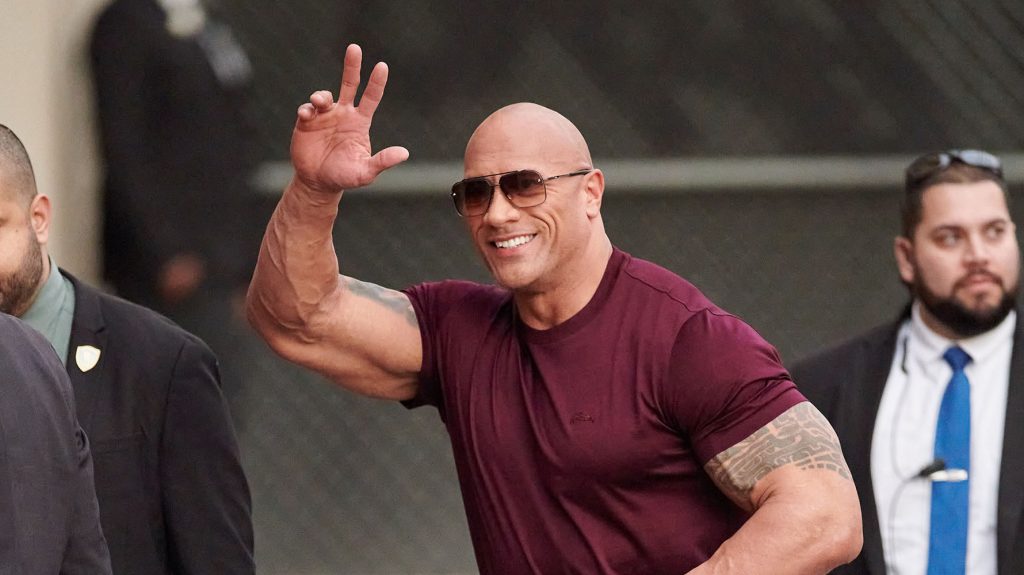 Obviously, it is not possible to train properly during the active filming process of the new film ‘The Rock’. It takes too much time to work. At the same time, in preparation for filming, the actor often has to, on the contrary, work hard so that the muscle mass on the screen has maximum volumes and tone.

In one of his interviews, Dwayne Johnson told what he has to go through in such cases. We also want to share this information. It will be about preparing for the filming of the film “Hercules”.

When you are an athlete who has become an actor, and without that idealized by millions of people around the world, it begins to seem that you don’t need extra training at all. But wrestler Dwayne Johnson does not think so: in his opinion, it is possible and even necessary to train regularly, regardless of status. That is why, among former athletes, he remains one of the highest paid actors in film and television, and in general.

If the life of a WWF / WWE champion has taught anything, then this is the rule that you need to invest as much as you want to receive. The same goes for training. That is why he devotes so much time to training in the gym, keeping his physical shape at peak condition. In his place, others would have long given up on this venture, preferring to bathe in the rays of glory.

“For different roles, my physical condition, training program and diet were strikingly different,” says Dwayne ‘The Rock’ Johnson. “The character I’m going to play determines a lot how I’m going to work out. Nutrition too. For the filming of Hercules, we chose a strict 22-week diet, while I was on a diet of only 14 for The Cobra Throw. weeks, because my weight was almost perfect. The most, perhaps, the most serious trials I had to go through filming “Anabolic: with blood and sweat.” I had to look bigger and more dangerous, and it’s not as easy as it seems. ”

“Hercules did not require such a large mass. It needed a demigod, not Dwayne Johnson, so the training and diet had to be changed again. In the end, I first of all had to get relief muscles and gain in strength. When you play such a powerful character as a son Zeus, you have no second chance. To look powerful in the here and now is the main goal. Besides, the film was based on the rather dark graphic novel “Hercules: The Thracian Wars” – we aimed for a terrifying image of the hero. ”

“It is also worth understanding that preparation for a role is not only training in the gym and diet, but also training in combat choreography, often the study of martial arts, exercises with cold weapons. All this, again, should be taken into account by the training program, otherwise in the end in the end, you will simply burn out, and there will be no energy left for the film itself. ”

As far as we know, for “Hercules” Dwayne Johnson has significantly increased his usual training. To get stronger, he practiced according to the scheme “6 days of exertion + 1 rest” for six months. Every morning, ‘The Rock’ woke up and did a 50-minute cardio session, and then proceeded to pump specific body parts depending on the day. Legs, by the way, were the only part of the body for which more than 1 workout per week was allocated. Arms, torso, neck and others – maximum 1 session per week.

“I started workout early at dawn, around 4 am. On filming days, I just do cardio and do a little ‘pull’ before going to the set. Even when there is no filming, I still get up very early and work out. In such an environment, I can safely put on my headphones, go out the door and train without disturbing anyone, and so that no one bothers me. In the gym you need to be one hundred percent concentrated, and music helps in this. – this is not a place to waste time and energy. ”

At the end of the interview, Dwayne ‘The Rock’ Johnson shared some more considerations: “My workout can last up to an hour and a half, perhaps a little more. As soon as I step outside the gym, I forget about all my worries, I train with all my might. I came here to kick ass, not play the fool. With a different mindset, neither sports nor acting will succeed. You need to be the best of the best and strive to become even stronger, otherwise you will be quickly passed.”